Yours Truly, Johnny Dollar By

The opening is familiar among fans of Old Time Radio: "the man with the action-packed expense account...America's fabulous freelance insurance investigator." And if we still weren't sure, he always told us himself: "Yours truly, Johnny Dollar."

Opening on a Friday night, February 18, 1949 (The Parikoff Policy Matter), right at the start of television's golden age, this radio show brought us a high-powered insurance investigator who worked chiefly for the Universal Adjustment Bureau, a clearinghouse for the many insurance companies. The series starred Charles Russell as Johnny Dollar, the smart and tough detective, whose trademark it was to toss silver dollars as tips to busboys and bellhops.

Appearing on CBS Radio, Johnny Dollar was heard each week flying off to a different town filled with danger and possibly murder as he tried to get to the bottom of insurance fraud. There were rarely any recurring characters except Dollar; despite sometime romance and friends, the character was generally a loner. These early episodes, however, tended to be flat and the character of Dollar too dry. Compared to the likes of Howard Duff's Sam Spade, Johnny Dollar was too much the wisecracker, always ready with a flip phrase. During that year, Paul Dudley and Gil Doud wrote the show. So at the start of the 1950 season, Charles Russell was out and veteran film actor Edmund O'Brien stepped in as the second Johnny Dollar. The series during the O'Brien years improved with scripts by expert crime writers such as E. Jack Neumann, John Michael Hayes, Sidney Marshall and Blake Edwards. The character took on the stereotype of the American detective developed by Dashiell Hammett and Raymond Chandler. Dollar was more hardboiled; short on emotion, his softer side rarely appeared. O'Brien left in 1952 and John Lund became Dollar number three. With Lund in the role, the character as developed by O'Brien remained. 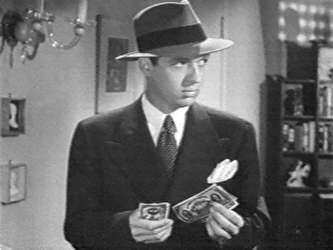 In 1955, radio actor Bob Bailey, fresh from his long run as George Valentine in Let George Do It, stepped into the role as the fourth Johnny Dollar (there was an audition show with Dick Powell in 1948 that is not counted). It was with Bailey that the series really blossomed. Changing to a 15-minute format five times a week, and under the sharp eye of the new producer/director, Jack Johnstone, the scripts went much deeper into characterization and plot. And Bailey's depiction of Dollar had shades of the gritty street fighter, yet bright and sensitive. With a strong cast (many of the same veteran radio actors appearing in different roles) and excellent directing, the portrayals were much more real. And exciting; listen to such serials as "The Open Town Matter" or "The MacCormack Matter." Even while radio drama was already declining, this was radio acting at its best. One had the impression that these were real people carrying on conversations, not actors reading scripts. The sound effects, some of which were canned, fit into the scripts so well as to produce some very exciting adventure/mystery.

But doing a daily show even if transcribed weekly was taxing, so by the end of 1956, the series reverted to thirty minute, once-a-week episodes. But the power of the show continued, due a lot to the continued presence of both Bailey and Johnstone. Gradually, however, toward the end of the 1950's, the show began to sound tired - some of the scripts were weak and even Bailey did not always seem excited.

Bailey left the show when it moved to New York production studios and initially Bob Readick filled Johnny Dollar's shows. However, that was only a transition that lasted six months. In June, 1961, Mandel Kramer came to the role. He was perhaps the second best of the Dollar portrayals. Kramer's Dollar displayed more cynical humor than Bailey's. Johnny Dollar remained sensitive yet tough and with Jack Johnstone continuing as producer, the series remained poignant right up to its demise.